Pithla Company and Burping in Brooklyn

Pithla - and a big hello to all my readers in the USA!

Thank you and love you! 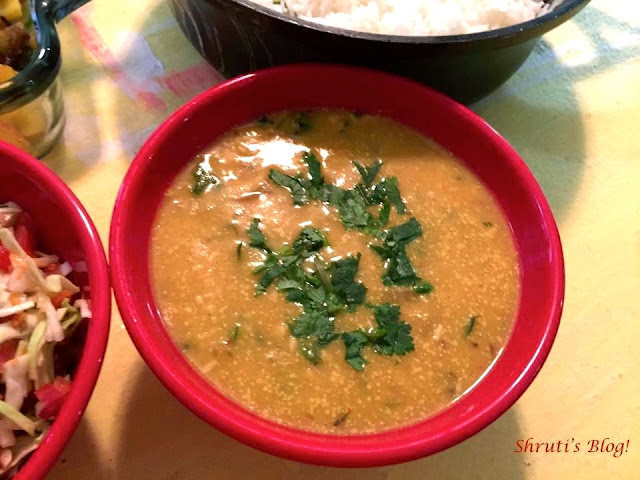 “Pithla Company” is a good-natured racial slur, almost like an in-joke we have to denote Marathi speaking people, including ourselves. It does seem like it, but it’s really not meant to be derogatory.

How could it be offensive, for pithla with bhaat or bhakri is one of the most comforting and satisfying foods one can ever think of?

It's a quick and easy dish that is made when one is in a hurry or needs a palate cleanser after a series of feasts. It's equally an apt "shramaparihar" after a tiring wedding function, as an offering by one's neighbours  in commiseration when there’s a death in the family.

My daughter and I have been travelling in Europe and the US, soaking in the culture of the cities and countries- it has been all about museums, monuments and mementos. Just as it has been about Shakespeare and Wordsworth, Victor Hugo and Walt Whitman. And it also has been about Pharaohs and mummies and the Gothic and the Baroque.

But as true foodophiles, it has been significantly about local cuisines, what is grown, how it is cooked and presented, what people eat and why and finally, what we could eat as vegetarian and vegan “Pithla Company”.

We have made it a point to visit local grocers, wholefood stores, farmers’ markets and even local desi or Asian groceries like Shah & Cie where we met Mr. and Mrs. Shah who had moved from Madagascar to Paris 40 years ago. Then there was Le Marché Sacré Coeur up the street up the street from the hotel, which has large bowls full of brined olives and vegetables of all description, size and colour.

There have been the sporadic, short-lived dalliances with Indian restaurants. We have had some memorable meals such as last night’s masala dosa at Sarvanna Bhavan in Manhattan; the dal soup and veg biryani at Ravishankar Bhel Puri Centre near London’s Euston Station; the crispy bhindi at "Dhishoom, the Bombay style Irani café in Covent Garden in London and the Lebanese platter near the Louvre in Paris.

But often we have paid more for the familiar comforting sights and aromas of Indian food, than for any real satisfaction of a great meal.

All we crave now is a simple home cooked meal. 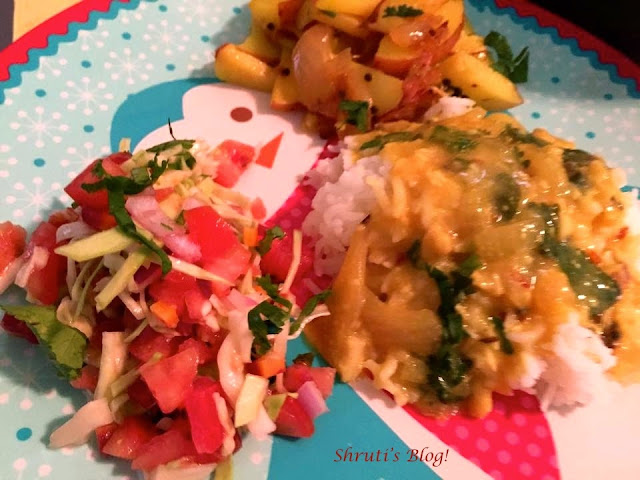 This morning we moved into a serviced studio apartment in Brooklyn that is going to be my daughter’s home for the next month when I head back home in a week.

Three important discoveries we made this morning:

•  there are many cute semi-feral (/sɛmaɪ/, please – we’re in the US) cats living
off the dumpster in the basement of the building
•  there is a community-owned natural food store nearby
•  and that there is a Laundromat four doors away.

More about the cats and conveniences later, but here is a list of things we bought among many others:

The menu is a no-brainer - at least for the "Pithla Company". 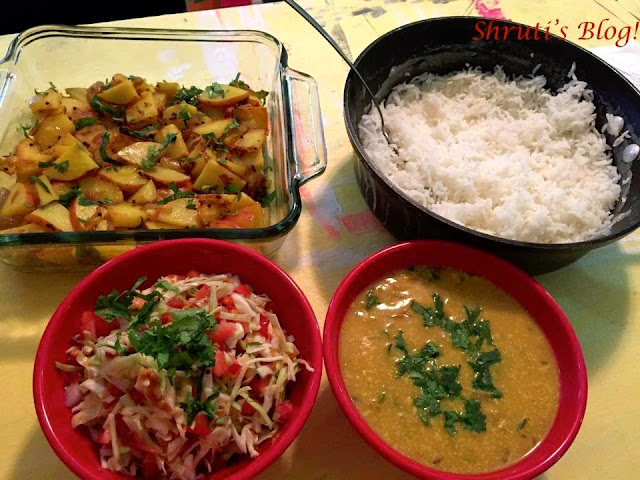 Pithla – bhaat, cabbage chi koshimbir - made very authentic with the addition of the crunchy, freshly crushed peanut butter and Batatyachi D-chi bhaji (named so by a child in the family as the quartered slices look like the alphabet D).

The meal is ready in not time, despite our fastidious thorough cleaning of the kitchen and pots and pans – for we don’t know what previous guests have cooked in it, on it, with it…

Adequately pre-admonished by my daughter to keep the photo session short, we took some quick clicks for the blog and tuck into the best belch-inducing meal of the tour so far.

The hearty “dhekar” or burp of satisfaction will vouch for that.

Heat the oil in a large pan and add mustard to splutter. Add the chopped onion and sauté for a while. Add the haldi and red chilli powder and sauté further. Then add water and bring it to a boil. Then gradually sprinkle the besan, a little at a time, and keep mixing continuously to avoid very large lumps from forming. Small lumps are ok, in fact the pithla tastes better with some small lumps.

Add salt to taste and the desiccated coconut and cumin powder and stir lightly. Cover and cook for a short while until you see white steam emanating from the sauce. Be mindful that if you make it too thick, the pithla will start to spit and scald you!

Garnish with chopped coriander leaves and serve hot with rice.

Don’t forget to burp afterwards – a good, loud, deep and long-drawn one.

It’s polite for “Pithla Company” to do so.

Posted by Shruti Nargundkar at 07:05

Welcome weary web wanderer!
I hope you have found whatever you were looking for!
I would love to know what you thought of my recipes and posts- so why don't you drop a line?!

My blog has recently been added to Vegetarian Blogs, which is part of one of the largest networks of blog directories on the Web. Please visit my blog's personal page to vote for my blog and comment to other blog users.